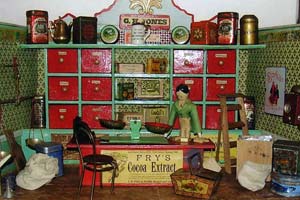 Welcome to the Ty Twt Dolls’ House and Toy Museum in Newport, Pembrokeshire.

The Museum houses a unique private display of Doll’s Houses and toys of the past inherited and collected by two sisters – Pam and Val Ripley.

In July 1939 their father went back into the Army and everything including their toys was put into store ‘temporarily’. But three months later the war came and they remained in store for the duration. At the end of the war they went into the parents attic and were forgotten. 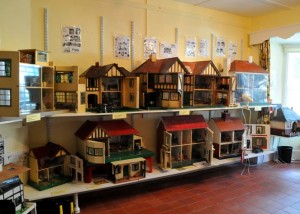 In the late seventies they were discovered still in their storage crates – Val’s wonderful early 30′s dolls’ house ‘The Gables’ with all its original contents, their mother’s dolls and toys which had been together for over 100 years and their own childhood treasures. It was a magical moment and they realised that, quite by chance, they were the lucky owners of a unique and enviable toy collection.

They decided to build on it and now have a doll’s house of every period from 1840 to the present, each furnished only with items from the date of the house, 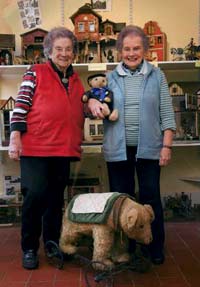 and representative examples of all kinds of playthings from the past – stables (the Victorian boys’ dolls’ houses), Shops, theatres, schools, room settings, soft toys, tin and mechanical toys, games and lots more. It is a very special museum which opened in 2010 in Newport, where Pam and Val spent their childhood holidays. It is fascinating for grown-ups and children and not to be missed if visiting Pembrokeshire.

Pam and Val are well known collectors – both long-standing members of the Doll Club of Great Britain – the nationwide club for doll and toy collectors – and Val is a member and a past President of the Doll’s House Society.

We both look forward to you visiting us at the Dolls’ House and Toy Museum, Pam and Val.